Tuned Up & Calmed Down with Acutonics 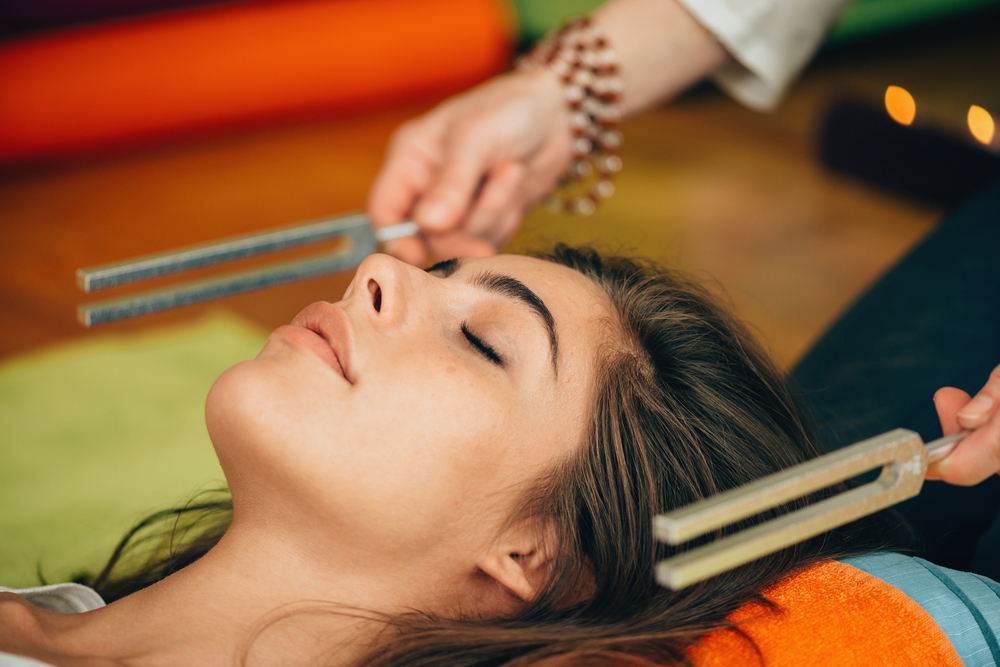 When it comes to natural ways to relieve stress and reduce anxiety, I’m always up for something new. While visiting Canyon Ranch (www.canyonranch.com) in Lenox, Massachusetts, I got the chance to try out a healing system that needle phobics can embrace.

It’s called Acutonics. Developed over a decade ago by acupuncturist Donna Carey and musician Marjorie de Muynck, Acutonics is a non-invasive treatment modality that applies vibrating, precision-calibrated tuning forks to specific acupuncture and acupressure points or chakras (“energy centers”). The idea is that the sound waves the tuning forks produce travel into the body along energy pathways called meridians, balancing the body’s “qi” (the Chinese way of saying “energy“) and attuning the human energy field. Far out to some, but I figure it can’t hurt — literally.

The session begins in medical fashion with acupuncturist Danielle Hampton asking me about my sleep, my appetite, and my menstrual cycles. She looks at my tongue and takes my pulses, as any Doctor of Oriental Medicine would. Not all Acutonics practitioners are trained in Chinese medicine, however. Some may be massage therapists, chiropractors, naturopaths, even psychotherapists.

I tell Hampton I’m going through a large transition right now; moving forward is scary, I say. I fear letting go and entering a new phase in my life. Hampton takes notes and then gets to work.

As I lie clothed on a treatment table, Hampton begins tapping the tuning forks against rubber and then places them at various points along my body. I feel them vibrate for (I count) about 11 seconds. It’s a pleasant and subtle sensation, nothing painful about it. After about 14 seconds, she removes the tuning forks and moves on to more points.

She places a tuning fork at my ankle and one at my wrist because the points will “help me create new patterns.” Hard for me to grasp, but different tuning forks apparently have different properties — grounding, relaxing, energizing, tonifying, and so on. When Hampton attempts to ground my energy by placing a tuning fork on the bottom of each of my feet, I experience a jolt of energy that involuntarily lifts my legs off the table. I’m scared for a moment, which doesn’t surprise Hampton. The points she chose, she says, are related to kidney energy, which is associated with fear.

Intermittently, Hampton rings chimes during the session to create an environment of sound. Some are stirring; others are thought to be sedating.

Hampton views acutonics as a mostly supplemental treatment. “Most people turn to it for a soothing experience if they’re choosing it over acupuncture,” she says, but notes that she’s seen acutonics provide relief from pain, menstrual cramps, and hormone imbalances. Others claim it can be helpful for conditions such as depression, migraines, even tendonitis.

I certainly enjoyed the session and felt calmer, though I didn’t notice any lingering effects. But then I can say the same about most massages I’ve had. Great in the moment, but it doesn’t take long for stress and anxiety to seep back in. That may very well be my shortcoming, though, not Acutonics’s.

If you’d like more information about Acutonics, check out www.acutonics.com.

Portland is the creator, host, and executive producer of “What’s the Alternative?” on the former Veria Living TV. She also writes for Kripalu Center for Yoga & Health in Stockbridge, Massachusetts.