Cooking as Self-Care (with Trapanese Sauce) 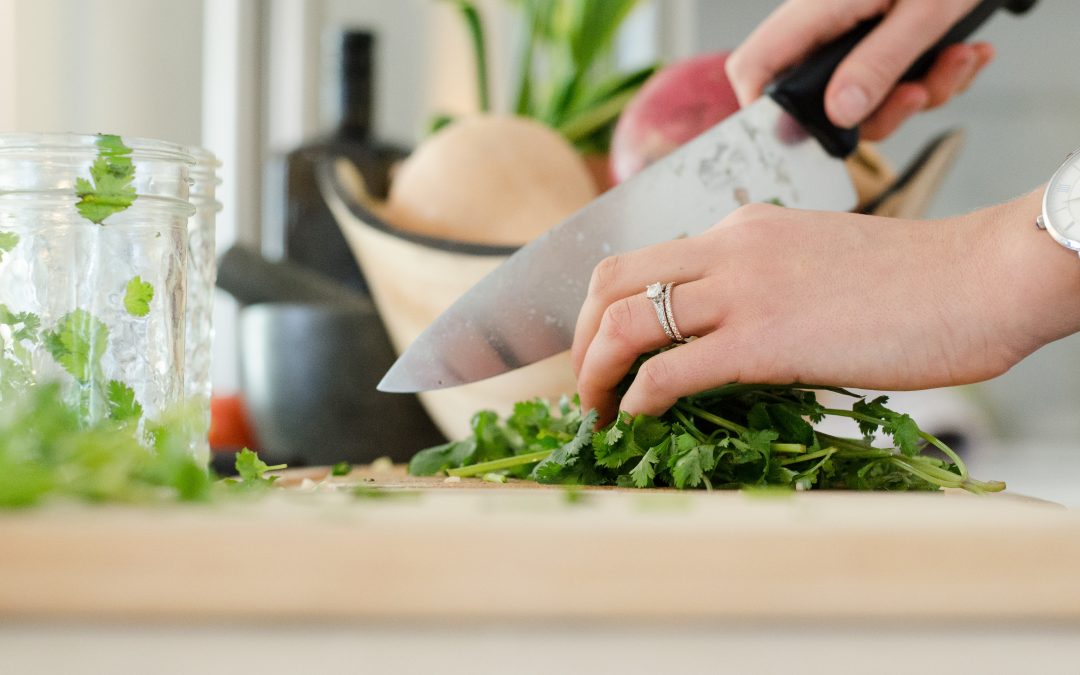 When I was a girl, my mother would ask my younger brother and me if we wanted to go grocery shopping with her or if we’d rather stay home. My brother would invariably jump at the chance to scan the supermarket aisles with Mom. He thought perusing all the gastronomic options was fun, and he liked to point out what he wanted her to buy—because he was a picky eater and because he liked to cook.

I, on the other hand, would choose to stay home and do my homework or read a book. I found the supermarket boring. And when my Mom and brother came home with the groceries, I didn’t feel compelled to join in when they began preparing a meal. I found cooking—the chopping, the rinsing, the stirring, not to mention the clean-up—a drag. But I sure liked eating. I still do, but cooking? Not so much.

I’ve always been a bit envious of people who feel at ease in the kitchen and seem to find so much satisfaction preparing meals for themselves and others. Even if I don’t share their passion, I understand how cooking can be therapeutic and creative. But even more than that, I most definitely see that it can be a form of self-care.

“By taking the time to put our energy into mindfully creating something that we consume, we nourish ourselves and others both physically and spiritually,” says Jeremy Rock Smith, Kripalu’s Executive Chef.

I asked Jeremy if he could suggest a simple recipe that someone who lacks patience in the kitchen could make—something fast and nourishing with few ingredients. I figured it never hurts to expand my recipe repertoire.

Instead of a dish, Jeremy suggested a sauce that can be used on top of pasta, tofu, fish, grilled vegetables, even a baguette. (The recipe is below.) Jeremy says Trapanese Sauce hails from Trapani on the northwestern coast of Sicily. He called it an “underrated form of pesto” because it incorporates three great summer produce items: basil, tomatoes, and mint.

“The mint is not traditionally used—it’s Kripalu’s twist on the recipe,” he says. “It’s light, earthy, refreshing, and there’s that little bit of Sicilian spice that gives it a kick at the end.”

And it’s full of health benefits. “Almonds and olive oil contain omega-3 fatty acids, the basil is anti-inflammatory and cardiac-supportive, and the mint is antibacterial and promotes digestion,” Jeremy explains, adding that tomatoes have lycopene, a powerful antioxidant that can help protect against degenerative diseases. (Lycopene is more easily absorbed by the body when the tomatoes are cooked, but, if you’re pressed for time and your tomatoes are ripe, you can keep Trapanese Sauce totally raw by skipping the roasting part of the recipe.)

Self-care is my greatest motivation when it comes to preparing my own food. With that in mind, I hopped into the kitchen and made Trapanese Sauce for lunch. With so few ingredients, it didn’t take much time; in less than 10 minutes, my tomatoes had burst in the oven, and they didn’t take long to cool. I tossed everything into the blender and found I didn’t need to add much water to create a pesto-like consistency.

I decided to spread my Trapanese Sauce on a wrap and add some arugula, avocado, and garbanzo beans (what I had on hand). It was yummy. What was most satisfying about my little meal, though, was not the taste, but the fact that I had set aside a little time to nourish myself. That made my Trapanese Sauce even more delicious.

Toss tomatoes and almonds in 1 tablespoon of olive oil and a pinch of salt (you can take the oil and salt from the ¼ cup of olive oil and ¼ teaspoon of salt) and roast them on a cookie sheet at around 350 degrees Farenheit until the tomatoes “burst.” Allow the mixture to cool.

Next, combine the tomatoes and almonds with the other ingredients (except the water) in a blender, and blend until the mixture becomes a coarse puree, the consistency of pesto. You can adjust the consistency by adding water.